What can’t Tahoe Production House do?

What can’t Tahoe Production House do?

So far, it can do everything anyone has asked. TPH can do simple things like converting a VHS into a DVD. It can also be a full service production house that writes scripts, shoots it, edits it and delivers the final product.

Most production houses – like the ones in Los Angeles – are broken into specialties. Brandi Ledbetter Brown, owner of TPH, wanted to develop a one-stop shop to meet the needs of clients so they didn’t have to go all over the place. 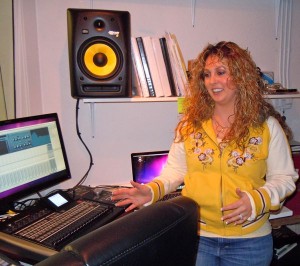 Brandi Ledbetter Brown is putting Tahoe on the map with her production house.

Her five-year plan involves companies from outside the Lake Tahoe Basin coming here to have their commercials shot or other video or recording needs met.

In the back the roll-up door allows a car or large boat to come into the studio via the loading dock. That kind of accessibility allows for a diverse clientele.

While some may question why South Lake Tahoe needs such a sophisticated enterprise, others are saying why did it take so long.

With 2,300-square-feet of space, the non-descript storefront on Highway 50 near Tahoe Keys Boulevard belies what lies inside. Equipment is state-of-the-art. A small blue box – the encoder – allows live productions so the studio can be turned into a radio or television studio.

The encoder is what led Chris Minnis, who produces the bodybuilding Tahoe Show, to hire TPH. Already in the can are the 30-second commercial and sponsorship piece for Tahoe Show. What the encoder will allow is for the August event to be broadcast on the Internet. This in turn will be a revenue stream for Minnis.

A massive server in the control room will allow the Tahoe Show to sell digital downloads.

“We can rent space on the server for video hosting,” Brown says of the cloud-based server that has 16 terabytes of online storage.

This is the brains of the studio.

While TPH is all about cutting edge technology, it’s also about creativity and having fun.

Walking in it’s more like being invited into Brown’s living room. Comfy furniture, a big TV and a foosball table makes one forget this is a business.

But this is part of the business. The television can be used to preview client’s work, conduct a virtual meeting, have a CD release party or some other venture someone envisions.

On the other side of the building Candy McCart is adjusting the lights before photographing Dave Corti for the cover shot of his golfing book.

Brown talks to McCart about the soft box lights. The patch panel allows McCart to adjust the built-in lights without having to go into the control room.

She is renting the studio space by the hour, with the bulk of the equipment her own. McCart picked TPH because no place else in the basin or Reno has what TPH has.

On Saturday, the TPH gang was working with a guy backed by Sony who needed a green screen for a shot for his music video.

Tim Whaley is down the hall. Jokingly, he is referred to as Brown’s work husband.

He’s in the Mac edit suite working on a promo for the South Lake Tahoe Wedding & Honeymoon Association. It’s about showing people what a wedding in the area could be like, as opposed to the traditional method of telling them. The short footage Lake Tahoe News sees is edgy, innovative and captivating.

Whaley is the technical half, Brown the people person.

She has a slew of independent contractors working for her – from sound engineers to photographers to grips.

Since the start of the school year she has been going to South Tahoe High School to help students working in the new digital arts academy.

Brown is very much a local. Her family has long roots here. She graduated from Incline High School, then went to Loyola Marymount University where in 2006 she earned a bachelor’s in TV and film production.

Her start in the business was on the other side of the camera – being part of Cinderella pageants and 16 years in Harrah’s Lake Tahoe’s “Ebenezer Scrooge” production.

Brown spent every Saturday for her four years in high school doing a five-minute spot for the now defunct KMTN-TV.

It was at a summer film academy during her junior year where she discovered what she wanted to be when she grew up.

“That’s when my love and passion for production of things came into play,” Brown said. “I started looking at schools and realized I could go to school and do this for a living.”

After college she spent a few months back at KMTN before working for RSN for four years.

Last year she started figuring out a way to create a production house in Tahoe – where she and her husband want to make their home. Now it’s a reality, with 2012 being the first full year Tahoe Production House is mixing up the sounds and images people want to create.